The Tiger Kart Club in WA hosted the Alloysteel International Carnival of Karts over the weekend of May 11th and 12th and what a huge event it was. Building on last year’s inaugural event the Carnival of Karts has cemented itself as one of the blockbuster karting events in Australia. Over 240 karts entered the 12 class format ensuring not only a full 40km race program but also huge fields and exiting racing all weekend.

Over $15,000 worth of cash and prizes were up for grabs as well as some very impressive trophies paying right back to 5th ensuring as many drivers as possible got to enjoy the spoils of the podium.

Racing started early Saturday and although an unfortunate timing system failure during qualifying put some real pressure on the track crew, the guys and girls in the race tower did an amazing job to get the meeting back on track. With the system completely shut down causing a 2 hour delay, qualifying had to be replaced with a ballot, reverse ballot format for heats one and two followed by the original zero points system leading up to the winner takes all final. The patients shown by all the competitors was amazing and probably an indication of the respect given to the club for making such a huge effort in organizing the event and an understanding that the system failure was completely out of the clubs control.

Following the delay and subsequent format change the meeting went on to be absolutely faultless with all the heats completed on time Saturday ready for the big finals day on Sunday.

The weather on Sunday was perfect with a beautiful clear sky and 23c temps setting the scene for an epic day of racing. Kicking things off with a track blessing from Minister Terry Donnington and a fantastic rendition of the National Anthem the Finals on Sunday were going to be fever pitch and the huge crowd were in for a real treat.

Along with the racing action the club also had a face painter for the kids and a special mother’s day brunch with lots of yummy treats for those amazing mums who probably would have preferred to have breakfast in bed than be getting up at 5am to get to the kart track. A massive thanks to Meg Clark and her Canteen crew who organized the brunch. Meg is another mum that should have been putting her feet up but was toiling all weekend in the very busy canteen. It’s members like Meg and also her husband Michael that makes you take stock of what it takes to make an event like this a success, the club is very lucky to have members like the Clark family that’s for sure..

The Cockburn facility is one of the largest karting venues in Australia and to see cars parked 100’s of meters down the road including filling the motocross track next door shows how successful the meeting has become in particular with the general public whom most had never seen or been to a kart track before. The club worked tirelessly promoting the event in the lead up with feature articles in the West Australian news paper and promotions at the V8 Super Car round the week before making a real impact on spectator numbers. A fully printed race program was available free of charge so the spectators could follow the action and with lots of information about how to join and race karts we hope to see many new people joining our great sport.

The action packed pre finals set the scene for the winner takes all finals Sunday afternoon and as is typical with this high pressure format a few drivers who dominated the heat races and looked set to take home the 1st place trophy fell afoul of some bad luck. Lee Foster who has been the most dominant CSH driver in WA for many years suffered an electrical fault while leading and a great drive from long time karter Dave Latham in the Open class with his awesome 200 super ended in a melted piston and a disappointing DNF following a clean sweep in the heats.

Round 2 of the WA KZ-2 series sponsored by Auto One and Ace Karting also featured at the event and what a show they put on. 26 KZ-2 karts greeted the starter for the first time at the historic Cockburn track. Ron Vandermeulen painted all the grid lines on the track prior to the event so we can have standing starts and the racing was just epic. Joey Hanssen the 2011 world cup winner dominated the event and set a new lap record of 46.63 seconds in the process. Blake Mills and Simon Gwilliam kept up with Joey during the heat races and looked to put some pressure on Joey but he just turned it up another notch during the massive 20 lap KZ-2 final to steam away with the win. Getting to see a driver of Joey’s calibre racing here in WA was a real treat. His smooth style and consistent braking and cornering skills were on show for all to see and many of our young drivers got to learn so much just watching him. Pearce Lehane was a late inclusion into the super professional Patrizi Corse KZ team and drove very well seeing he has never driven a KZ kart or raced at the Cockburn track before. He had the Birel kart singing in the final and was unlucky not to place in the top 5. The club would like to thank the WA KZ-2 organizers for bringing such a professional series to our meeting and lifting the whole event to another level. The guys from KZ-2 WA were fantastic to deal with and we look forward to having them again at next year’s event.

Some of the other winners were Ben Spencer who took an emotional win in Restricted 125’s his first major win in karting and knocking off 125 R stalwart Kevin Offer in the process, top job from Ben who is also a very dedicated member of the club helping out where ever he can. Brad Fitch came back to racing this year in his favoured class 125 Heavy and once again put on a dominating display in his new Tony Kart. His team mate Adam Garnaut in 125 lights also took out the win with his Tony Kart and with both sponsored by Core IT it was a great result for a formidable driver combination.

Huge congratulations to all the other drivers who won or placed in the top 5, well done

One of the best things about the Carnival of Karts though is you don’t have to win the day to take home the REALLY big prizes. With 5 engines and a new FA Kart up for grabs along with thousands of dollars in vouchers, computer games, tyres and lots of other cool stuff all you need do is enter and be at the presentations to collect your prize via random draw.

This year the FA Kart went to young Brock Kenny who is one of WA’s top young drivers only recently stepping up to Junior’s. Karting legend Remo Luciani was on hand to present the prize to Brock who was stoked with the new kart, well done Brock and massive thanks to Remo and Sabrina from Remo Racing who supported the event not only with the kart but also getting to see Remo racing Sportsman 100 Pro a real privilege for all of us here in WA.

Well that’s the 2013 Alloysteel International Carnival of Karts over for another year, the club looks forward to making the 2014 event even bigger and better and hope to bring more interstate and overseas drivers to this unique venue and event at the Cockburn International Raceway in Perth.

Huge thanks to all our sponsors and also to the Tiger Kart Club committee who have worked for many months in preparation for this huge event, bring on the 2014 Carnival of Karts. 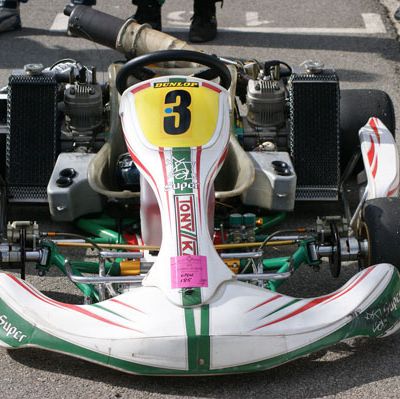 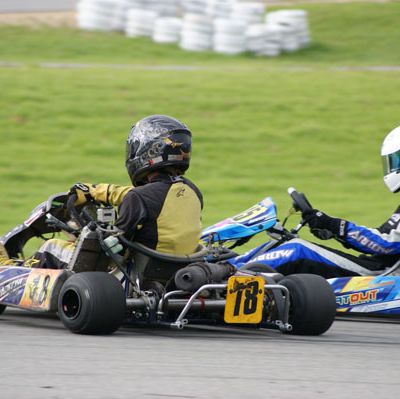 Tomas Gray getting some speedway style in125 Lights 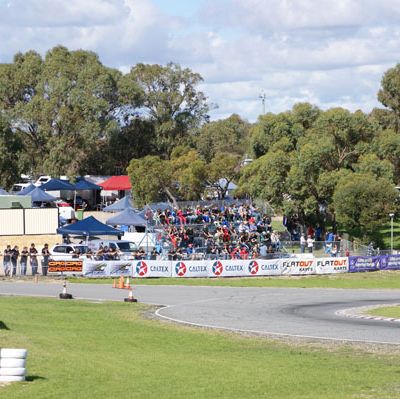 Packed grandstand at the Carnival 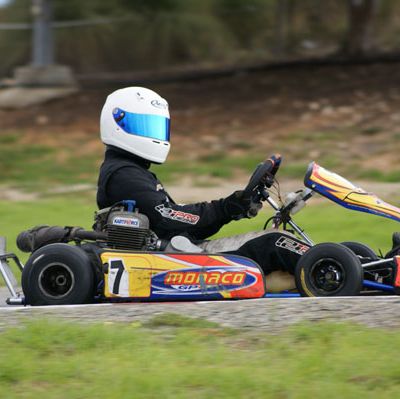 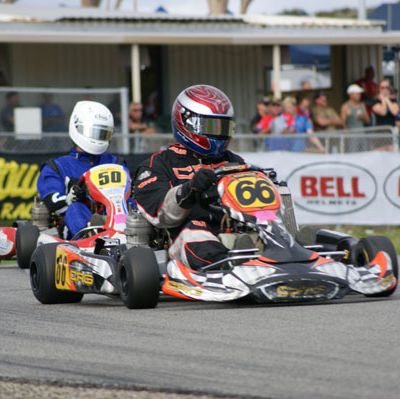 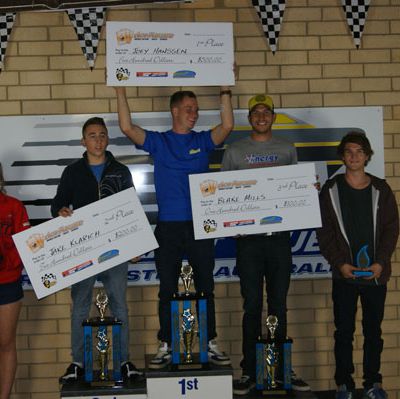 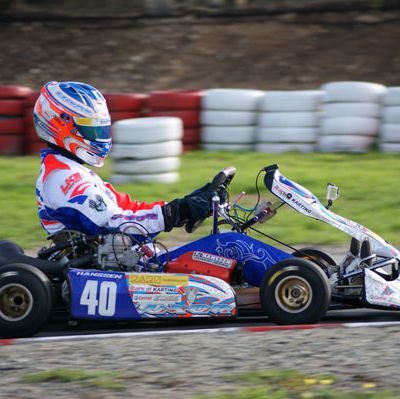 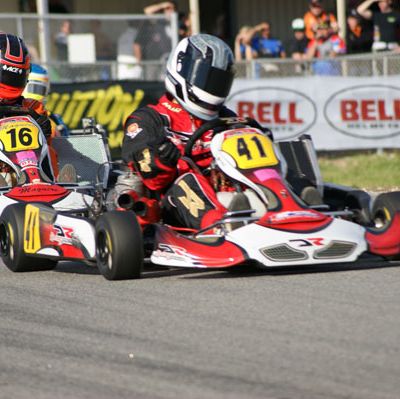 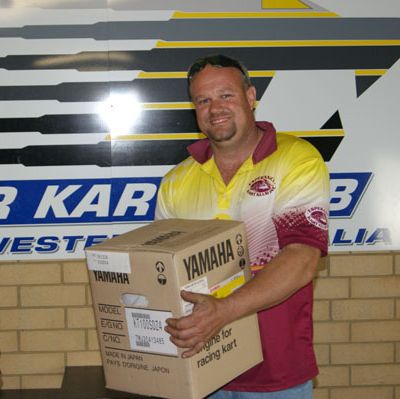 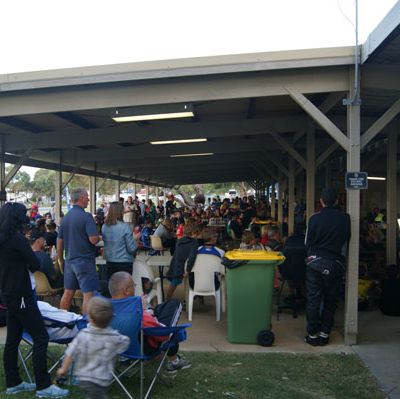 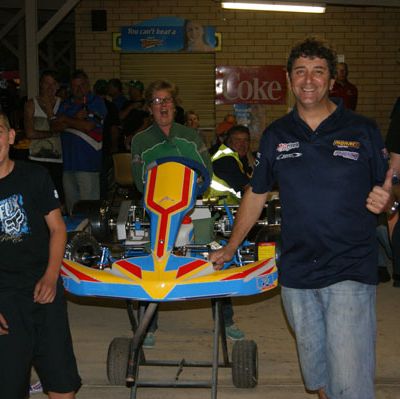 Happy Faces all round with Brock Kenny winning the FA Kart 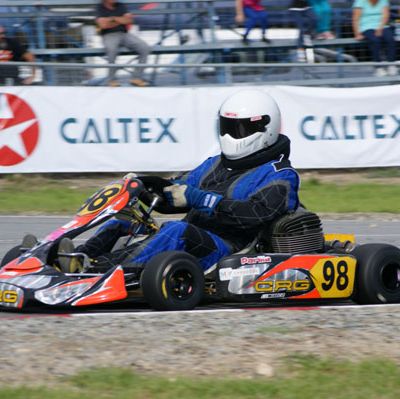 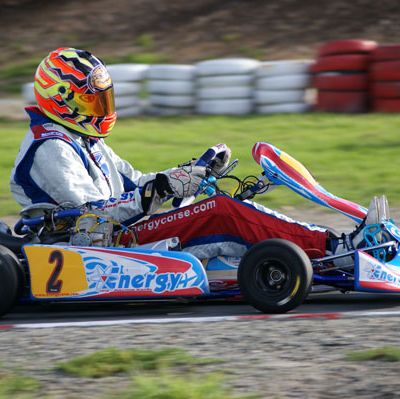 Blake Mills was awesome in the KZ2 races 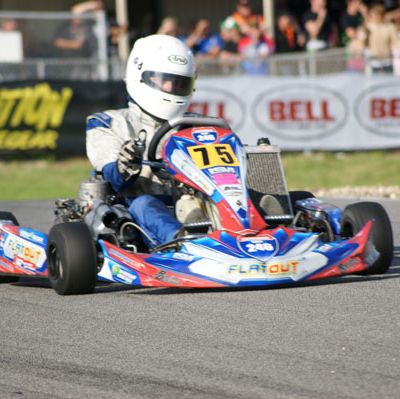 BD from Flat Out Karts in KZ2