Two hundred and five entrants flocked to Australia’s south west corner on the weekend to compete in the Annual FMA Coastal Classic. Not was it just an Australian wide event but we also had an appearance from some European drivers as well.

The feature class of KZ2 had a class of twenty five entrants with an appearance of some of worlds most talented drivers. Overall the racing was extremely close over the weekend with Simon Gwillam taking out fastest qualifier and being competitive all weekend Simon (Gumby) Gwillam taking out third in the final. But the person on a winning streak and looking up to win for the weekend was the world champion Joey Hanson taking out all the heats and having a solid lead over the West Australian guns Klarich, Mills, Gwillam, Le Cocq, Patrizi and Currey until the second last on the last corner snapping a chain. Taking out the final in first place was youngster Jake Klarich, second Blake Mills and third was turned over to fastest qualifier Simon Gwillam.

It was anyone’s game in the Sportsman 100 Super Heavy class. With a class of 8 competitors it was fairly close all weekend, with the number 37 kart of Nathan King taking out position one in qualifying and taking out heat one but going back into position three for the next two heats and taking out a solid place of second in the final. Although Ashley Pittard had a DNF in the first heat after qualifying second he came out with flying colours for the rest of the weekend and eventually took our first in the final.

With a class of sixteen competitors Junior National Heavy was set to have some close racing, which it certainly brought. Young Ben Harders taking out qualifying and finishing tenth in the final, but in the end it was young Tayla Dicker taking out the Junior National Heavy final onto Mathew Combes, Bayley Bell, Dominic Marchese, Brayden Parrella, Robert Hooper, Jayden Grech and Daniel Montgomery as the top 8.

Senior National Combined had a total of eleven drivers. Qualifying first was The number 8 Lenzo driver of Jake Truarn, then on to the long time driver of the 35 Omega kart, Cassy Nicholson and Thomas Gray in the number 18 qualifying third. During racing Jake Truarn fell behind a little but came back on top for the race the meant everything over the weekend, second was taken out by Cassy Nicholson and third was by Thomas Gray.

In the Junior Clubman class there was a total of 10 competitors. Junior Clubman qualifying was taken out by the number 14 FA kart driver, Thomas Howe with a qualifying time of 0:34.622. but in the end it was Young Cameron Nash to take out the final over Thomas Howe, Jason Betts, Connor Whitlock and Shae Thompson as your top five.

Restricted 125 heavy had a class of 12 entrants to compete in the annual FMA Coastal Classic. In this class local guy Andrew Jarvis took out fastest qualifier, trailed by Benjamin Spencer and Trevor Gaynor as the top three. But set to win the final was the number 14 kart of Benjamin Spencer second to Andrew Freeman and Andrew Jarvis taking out the last stop in the top three.

Having some of Australia’s best competing in the Cadets class was set to bring on a show. With the top three competing in the east week in week in week out they sure set on a good show. With the number the number seventy seven kart of young Damon Papasergio taking out P1 in qualifying. Trailing not so far behind was Jack Harders, Aaron Love, Griffin Gardiner, and Bartholomew Horsten qualifying fifth. But in the main race everything changed and the final position ended up going to Jack Harders, Damon Papasergio and third going to the 78 kart of Aaron Love.

In the Sportsman 100 Light the FA driver of Jesse Elliott qualified a credited first place but in the final had some bad luck and finished the weekend off with a DNF.  The cards were a lot better for the Kart Force driver of Scott Foster Starting the weekend out by qualifying second and finishing on top in the final followed by Aaron Grossman, Ben Johnson, Michael Jones and finishing in fifth was Kristy Nowlan.

In the Sportsman 125 heavy class the 84 kart of Blake Preston took out the first position in qualifying one with a time of 0:33.943 but Raymond Cochrane to out P1 in both heat one and two and finished the prefinal in seventh. But in the end no one could take the win away from the number 4 Arrow kart of Ryan Barron taking the win in the final over Timothy White, Raymond Cochrane, Blake Preston, Mark Phee, Michael Demarte, Vince Demarte and Joshua Randall.

The nine contenders for the crown of the 2013 Junior MAX FMA Motorsport Coastal Classic were quite a race to watching. WA state title holder Nikola Mitic took out P1 in qualifying. But in the end when the final flag dropped the number 8 kart of Zachary Vassallo came out with flying colours in the wet final. Second was taken out by Nikola Mitic then onto Alexander Barboutis, Jordan Love, and taking fifth place was Joshua Wood.

In the class where many of the man have been racing for longer then some of the cadets have been racing it was game on. The top qualifier of the Over 40’s was the number 3 kart of Craig Ryan with a time of 0:35.394 followed by Greg Dicker in the new X3 chassis and taking out the final position in the top three was the Kart Force member Craig Willis. But the great battle wasn’t over between Craig Ryan and Greg Dicker it had only just started. They took it up to each other all weekend and had some fantastic battles to watch but in the end Greg Dicker in the 71 kart was victorious.

The Sportsman 125 Light class was another to watch, the times is qualifying were very close but eventually Jesse Elliott driving the 17 kart was to take the win in qualifying again for his second pole of the weekend followed by several time national chap Kip Foster, Lewis Shugar, Nathan Davis, and in P5 it was Peter Bergman.  But again it just wasn’t meant to be for youngster Jesse Elliott who didn’t finish in the final. When the chequered flag dropped again the race standing were Lewis Shugar  in the CRG 66 kart followed by Nathan Davis in the KTEQ sponsored machine, Peter Bergman in the number 15 Arrow kart.

There was no about it that Western Australia’s best Junior National Light were in Bunbury at the weekend and that we were in for a show. With three hundredths between some drivers in qualifying it was set to be a close weekend and eventually taking out P1 in qualifying was the young Bunbury bullet Brock Kenny in the 14 TonyKart with a time of 0:37.308. Second going back to the number 12 of Jesse Thomas with a 0:37.333, and Nikola Mitic in the 96 machine in third with a 0:37.447. But the race that counted was taken out with a 1.1 second lead by the 79 Monaco machine of Jordan Love, followed by Nikola Mitic, Samuel Dicker, James Howe, Alexander Rullo, Henry Lake, Cameron Nash, Brock Kenny, Mitchell Perrella and in tenth Ross Rann.

The final class of the weekend was the Restricted 125 Lights. The fastest qualifier was Thomas Spence in the 66 Kart Magic machine with  time of 0:34.734, trailing behind was Kerry Foster in the 31 Kart Force Machine and taking out third was Salvatore Russo in the 17 machine. What shocked everyone was the p-plater in the 50 kart of Josh Mulholland who finished on the top of the score sheets. But in the end the final results came out as Josh Mulholland, Thomas Spence, Brendon Harders, Andrew Freeman and Benjamin Spencer taking out fifth position. 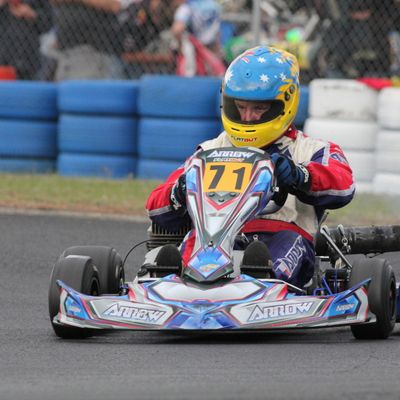 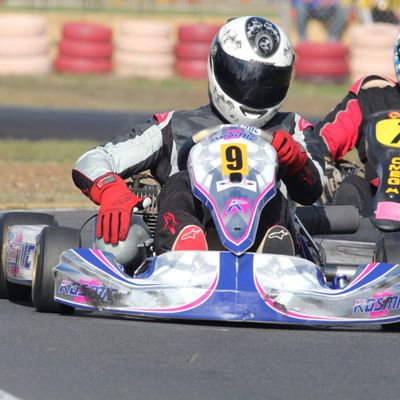 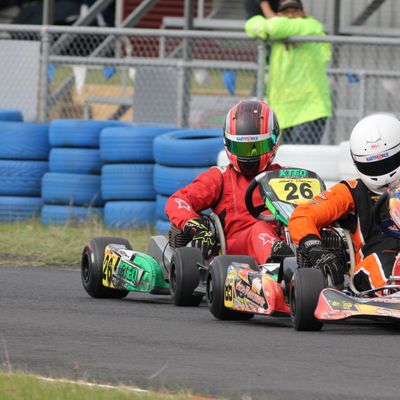 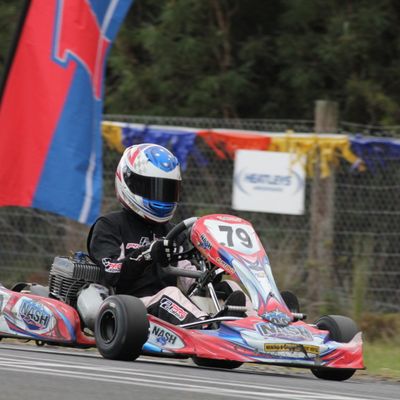 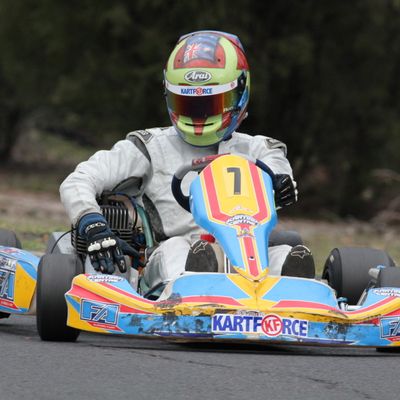 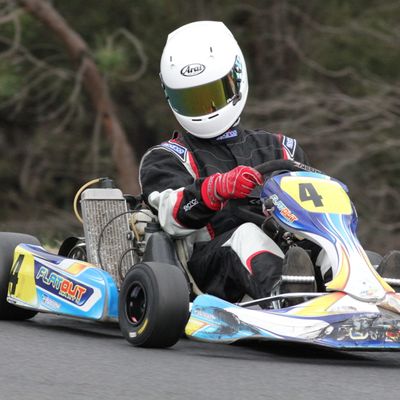 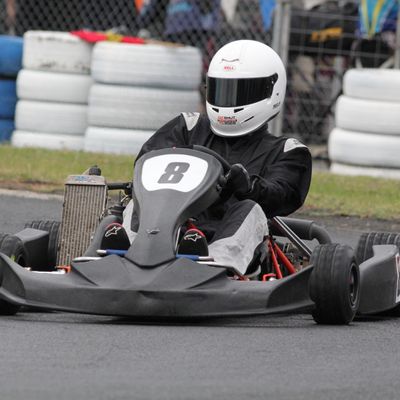 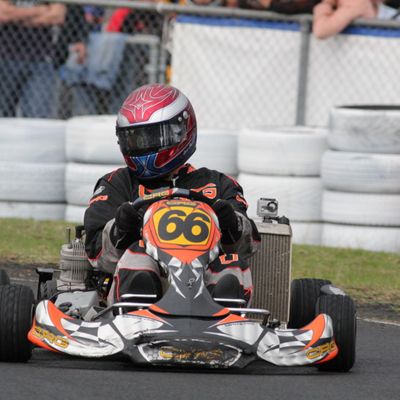 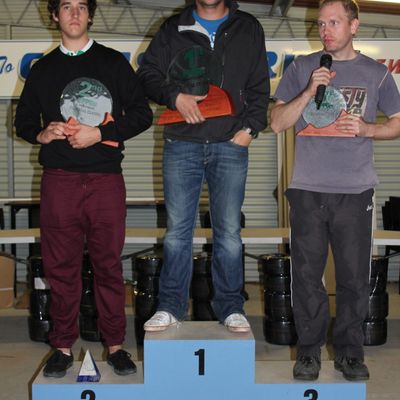